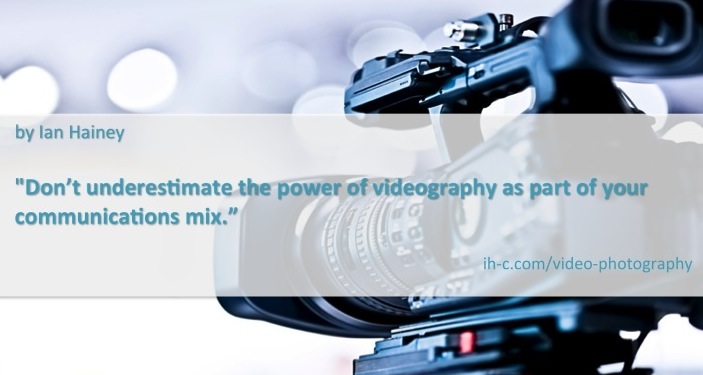 So your organisation is doing some great things right now, or you are spending a healthy budget on activities or activations. You understand the need to communicate what you are doing to the right audience and have invested time in recruiting the right communications agency to deliver regular PR and social media with a sprinkle of advertising and in order to ensure messages are getting out to your audience.

You are operating well within your budget and things seem to be progressing just fine. However, I would argue there is a compulsory element missing – and it’s a service that gets increasingly important year-on-year. Rich media, and in particular, capturing the key messages on video.

Following on from my blog around this time last year on the importance of how skimping on photography budget, can be a false economy nothing much has changed and the issue extends to videography.

As an agency, we have handled countless events, launches and PR opportunities over the last year and we still feel lucky enough if we can encourage clients to invest in some decent photography, never mind a short video clip showcasing what they are doing. Sometimes, such a video can cost as little as five per cent of the activity it would showcase, but one could argue it gives it double the value, when done well.

Look at this minute clip put together for Frankie’s Comedy Cellar – a weekly (Saturday) comedy event we put on for the delicious Frankie’s restaurant in JBR, Dubai: watch clip

I am in a position to say it is ‘delicious’ because I never dine out Italian, but still find myself buying the sea bass or lasagne every week as I settle down to watch the show. It’s a fantastic evening, which ticks many boxes, but who really knows unless they go along and experience it themselves?

Well the answer (in this rare case where we have a video clip) is – thousands, as we have shared the across social media several times and advertised it out on behalf of the venue to a whole new audience. It is short, fun and energetically showcases the essence of the evening, the food, drinks and atmosphere.

Now, this isn’t only a shameless plug of our services – far from it – video is a small part of what we offer and having this type of video to accompany an event is still all too rare. It is a cry out for clients to begin demanding videography and photography and valuing it as a powerful element of their communications artillery.

A September 2015 survey by researchers ascend2.com found marketers were struggling with video content, despite acknowledging its impact. 85% of those surveyed said video marketing was either somewhat or very successful in achieving objectives. When asked what were the most challenging video marketing obstacles they faced, 39 per cent cited inadequate video budget (39 per cent) and lack of production resources (38 per cent) as holding them back.

However, we work with photographers and videographers of all levels and prices so we can usually offer an option that can be worked into a budget – from basic and raw to television-standard with animation. The uses for this type of rich media are many and powerful, so there’s no excuse for skipping this important element of your communications mix.

Some examples of IHC rich media